Welcome to the 8th edition of My Fortnightly Movie/TV Thoughts.  Last fortnight I reviewed Die Hard 2 (1990).  This fortnight I’m reviewing:

These are the Australian ratings; in the United States, they’re rated:

As usual, I give the trailer and a clip at the end.  And as usual, the following disclaimer applies:

Die Hard with a Vengeance 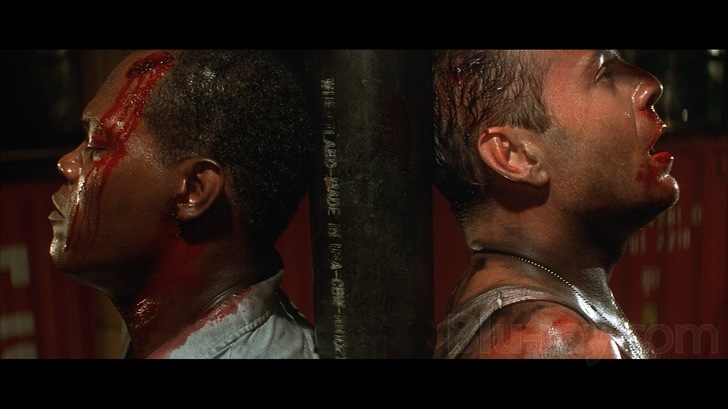 Although technically not quite reaching the heights of the original Die Hard, John McTiernan’s third installment in the beloved action thriller franchise comes close, and is my personal favourite of the series. 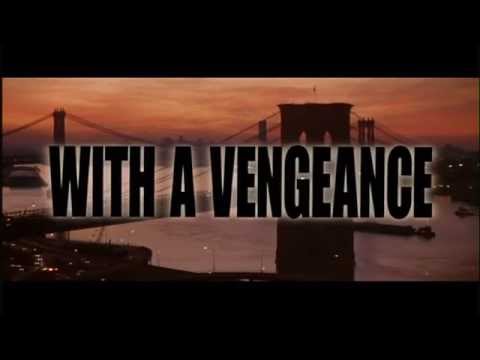 The movie starts with a bang – literally.  A Los Angeles Bonwit Teller department store is blown up.  As the NYPD investigates, they get a call from a mysterious Simon (Jeremy Irons), who claims responsibility.  He demands John McClane (Bruce Willis) stand in the middle of Harlem – a predominantly African-American New York suburb – in his undershorts with a sign “I hate niggers”, or there’ll be more explosions.

McClane complies and is almost killed by a gang – but is saved by a shopowner named Zeus Carver (Samuel L Jackson) – a racist with an attitude.  Back at NYPD headquarters, Charlie Wiess (Kevin Chamberlain) has discovered another of Simon’s suitcase bombs (one he had intended them to find), and demonstrates the binary liquids Simon uses – and the powerful explosions they create.  Simon calls again – and leads McClane and Zeus on a sadistic game of Simon Says across the city, all a big distraction from his own heist plans, although there’s a hidden motive the characters are trying to work out.  Can McClane, Zeus and the police figure out Simon’s game and save the day?  (Does that question need to be asked?)

First and foremost, like the rest of the films in its series, Die Hard with a Vengeance is enormously fun to watch.  We watch these movies to have fun seeing terrorists getting their arse kicked, and that’s exactly what we get – with a vengeance!  I dare say it’s possibly THE most fun-to-watch movie in the series, and is definitely the best of the Die Hard sequels – and possibly the whole series (it’s my personal favourite, at the least).  There’s plenty of tense, fun action – and heaps of violence of course.

The script/story is quite good.  It has quite a mystery element to it, much more so than the first two films.  What Simon’s motive is, what he’s planning, who the heck he is, etc.  The movie walks a fine line between recycling old plot elements, and combining it with new stuff – and I think it manages the balance between the two quite well.  It contains plenty of stuff we’ve seen in the previous Die Hard installments, yet feels – and is – too fresh to be called a remake of its predecessors.

The acting is great.  Bruce Willis is his usual excellent as John McClane, once again the reluctant hero (who in this case literally has no choice).  Samuel L Jackson is similarly excellent – more so, in fact – as Zeus Carver, the shopkeeper who’s even more reluctant than McClane ever was.  Willis and Jackson have a great chemistry – by far the best in the series.  I like the character development between the two – especially Zeus’, as his attitude towards whites softens during the film’s course (and I can’t help but enjoy the moment McClane calls him a racist).  Both excellent performances. 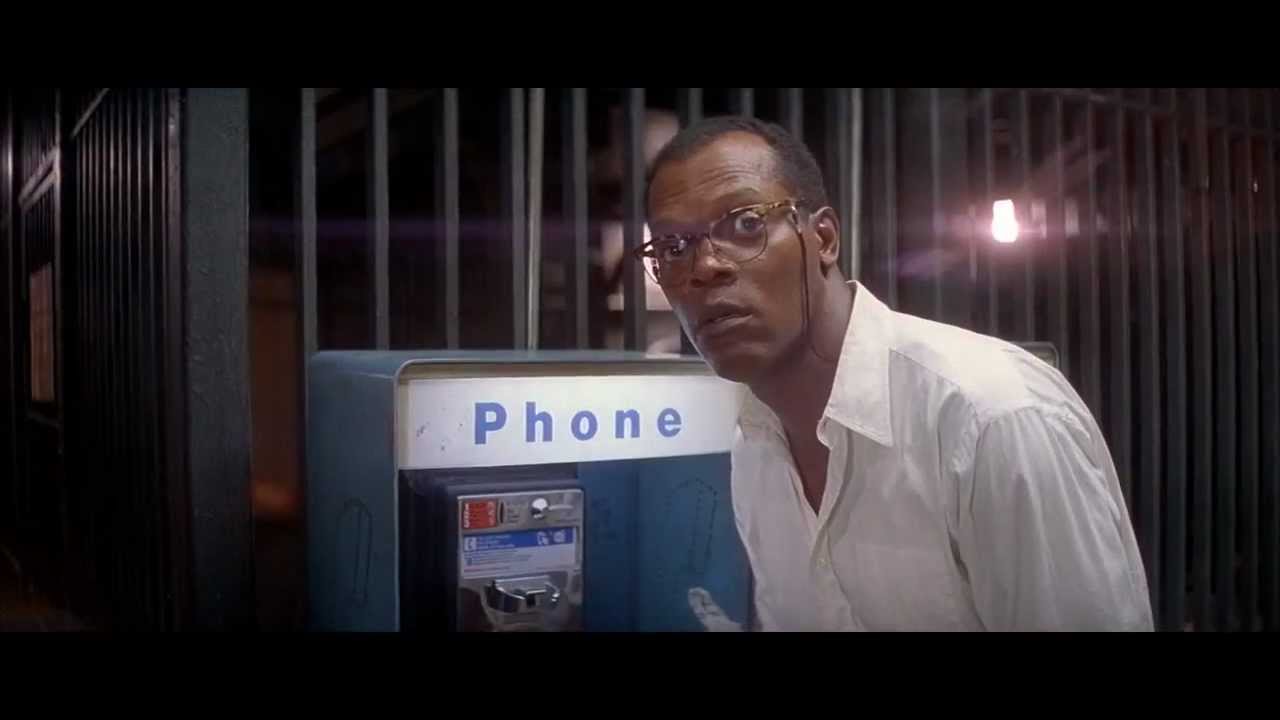 And Jeremy Irons is perfect as the mysterious Simon, who isn’t quite as great a villain as Hans Gruber, but is nonetheless great in his own right.  There’s a few twists and turns and surprises with his character (which I won’t spoil).  Like his brother, he’s absolutely ruthless.  Really great performance.

As is to be expected from a Die Hard film (indeed, any Bruce Willis action film), Vengeance is quite violent.  However, it’s definitely not as violent as the first two – in fact, violence-wise, it’s almost mild by comparison.  That said, it still has the potential to disturb younger viewers (John McClane is still his blood-covered self by the end of the film – not the only part that could disturb, much as I personally enjoy it).  It’s language, however, is just as strong as previous installments.  Overall, an excellent, excellent action movie!  (With an excellent music score.)  HIGHLY recommended! 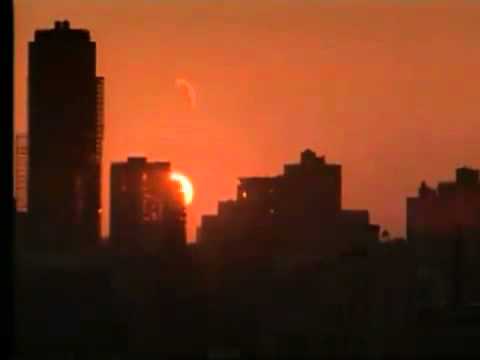 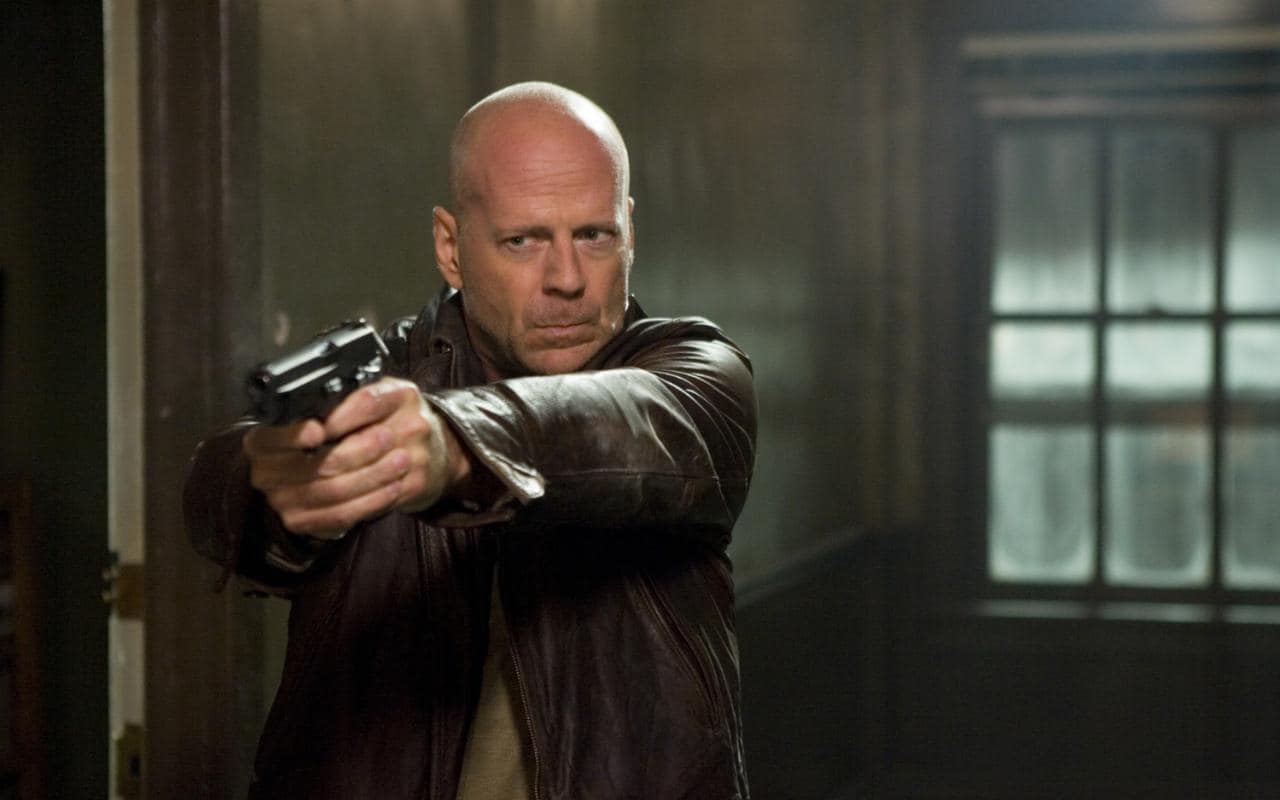 Len Wiseman’s contribution to one of the greatest film series of all time is variously hailed as the best sequel in the series, or as a major disappointment.  I beg to differ with both: while Die Hard with a Vengeance will always be my favourite, Live Free or Die Hard (as this film is known in North America) is a solid, hugely entertaining action thriller (and, from “best” to “worst”, the “middle” film of the 5).

The FBI’s Cyber-Security Division falls victim to a hacking attack.  Several of the expert hackers on the FBI’s watch list (who had unwittingly helped the villain hackers [couldn’t immediately think of a better term] create a cyber-security hacking algorithm) are immediately killed in house explosions triggered by a computer virus.  The FBI immediately begins rounding up the surviving hackers on their watch list.

Detective John McClane (Bruce Willis) is trying to bust his daughter Lucy (Mary Elizabeth Winstead) and her boyfriend Jim (Jake McDorman) – which only further frays his frosty relationship with his daughter – when he gets a call to bring in local hacker Matt Farrell (Justin Long) for questioning.  McClane is just in time to save Matt from assassins, and the pair make their way to Washington, DC.  Thomas Gabriel (Timothy Olyphant), the lead villain, begins taking control of the transportation grids and the stock market (they are shown to turn all traffic lights green, causing massive mayhem and crashes – disturbingly, there is a brief image of a DON’T WALK signal being changed to WALK).  They also hack into all the news outlets, broadcasting a threatening message by cutting-and-pasting parts of recordings of presidential speeches.  Matt recognises it as a fire sale – a three-staged cyber-attack that will destroy the US infrastructure.  He and McClane must save the day.

Die Hard 4.0 stands out somewhat from the other films in the series in that it’s about a cyber attack that just happens to endanger lives – rather than the guns-and-guts terrorist attacks/hostage situations of the previous films.  It’s quite a well-done premise and plot. 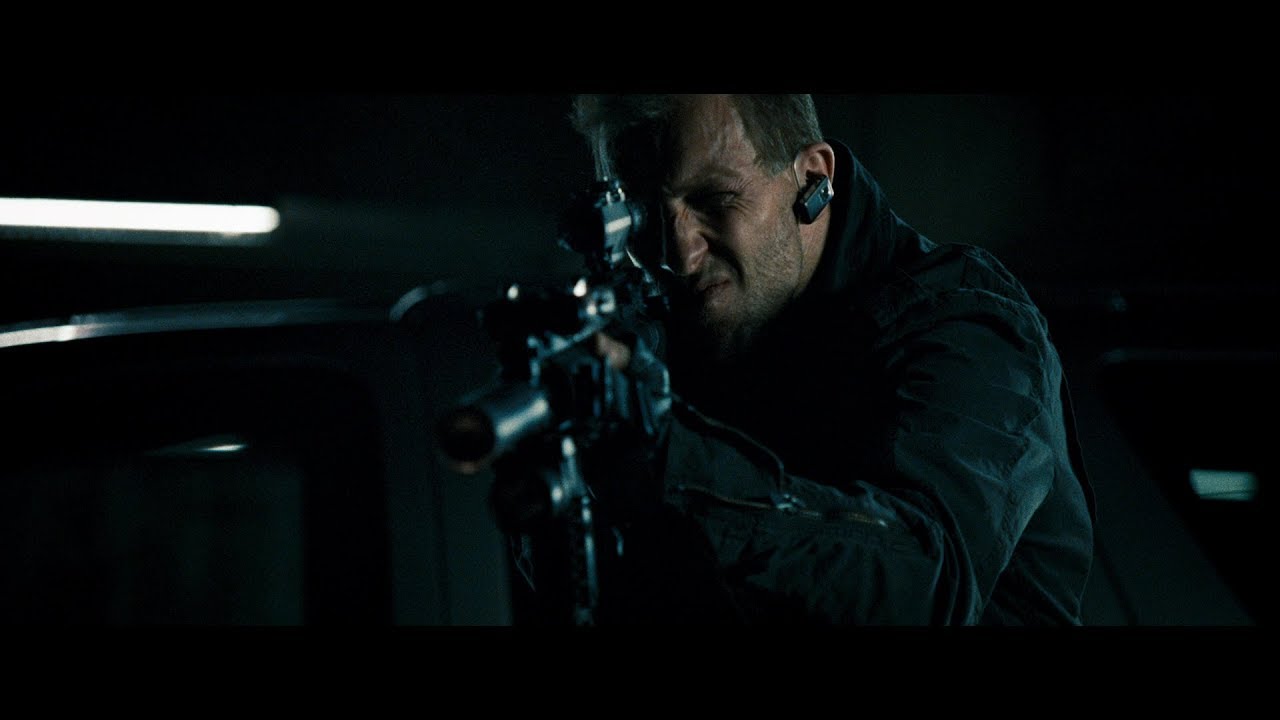 As usual, it’s enormously fun to watch, with plenty of great action and thrills.  It’s a true thriller.  And completely unbelievable – not so much the premise as some of the action, and McClane’s survival.  It’s totally preposterous – and fully embraces it.  It revels in its unbelievability – and I love every second of it! 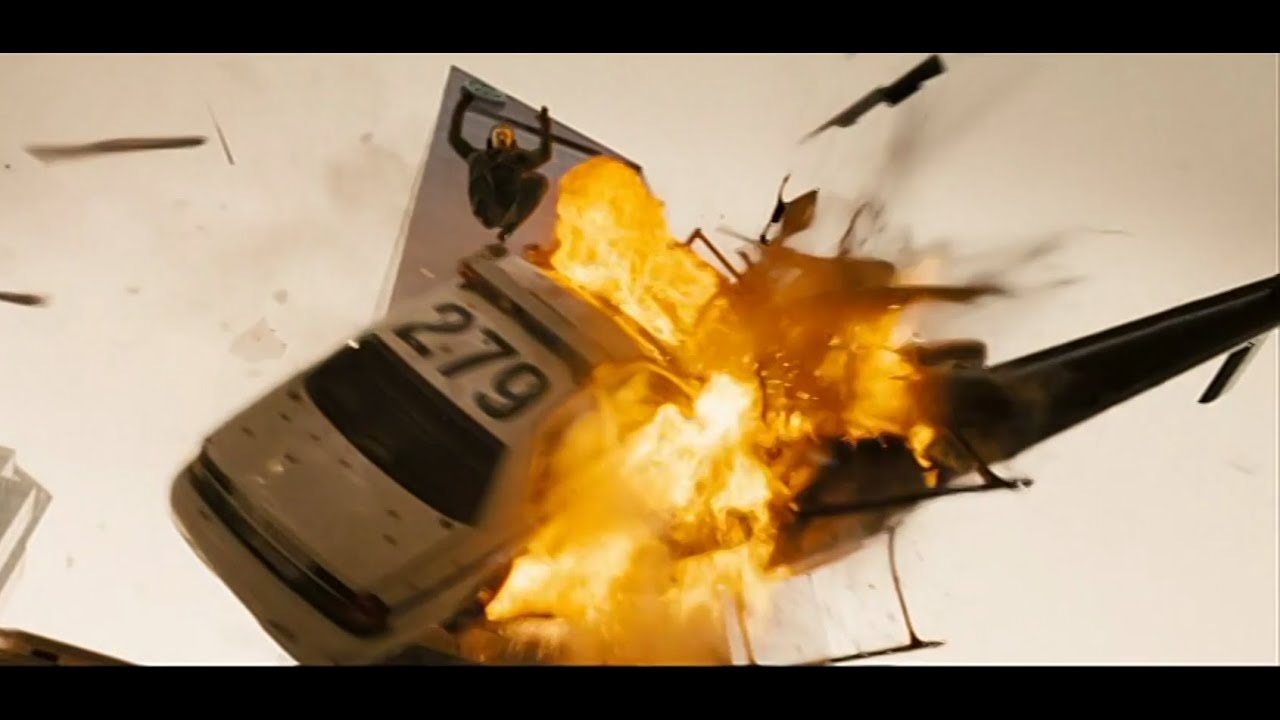 Bruce Willis, as usual, is excellent as John McClane, “the immortal cop” (to use one online description) who happens to be in the wrong place at the wrong time (or is that right place at the right time?).  And for the first time in the series, he’s BALD.

I quite enjoyed Justin Long’s performance as Matthew “Matt” Farrell, the young hacker unwillingly caught up in this national mess.  He provides quite a bit of humour, and I like his interactions with John McClane.  And then of course there’s the romantic hints between him and Lucy…

And I of course got a kick out of Mary Elizabeth Winstead as McClane’s feisty daughter Lucy. 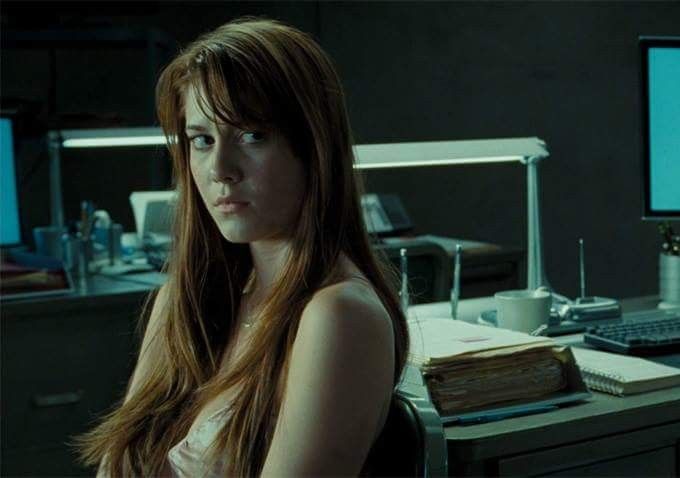 Timothy Olyphant was quite interesting as Thomas Gabriel, a former government guy whom the government had wronged, and who then chose to go rogue. 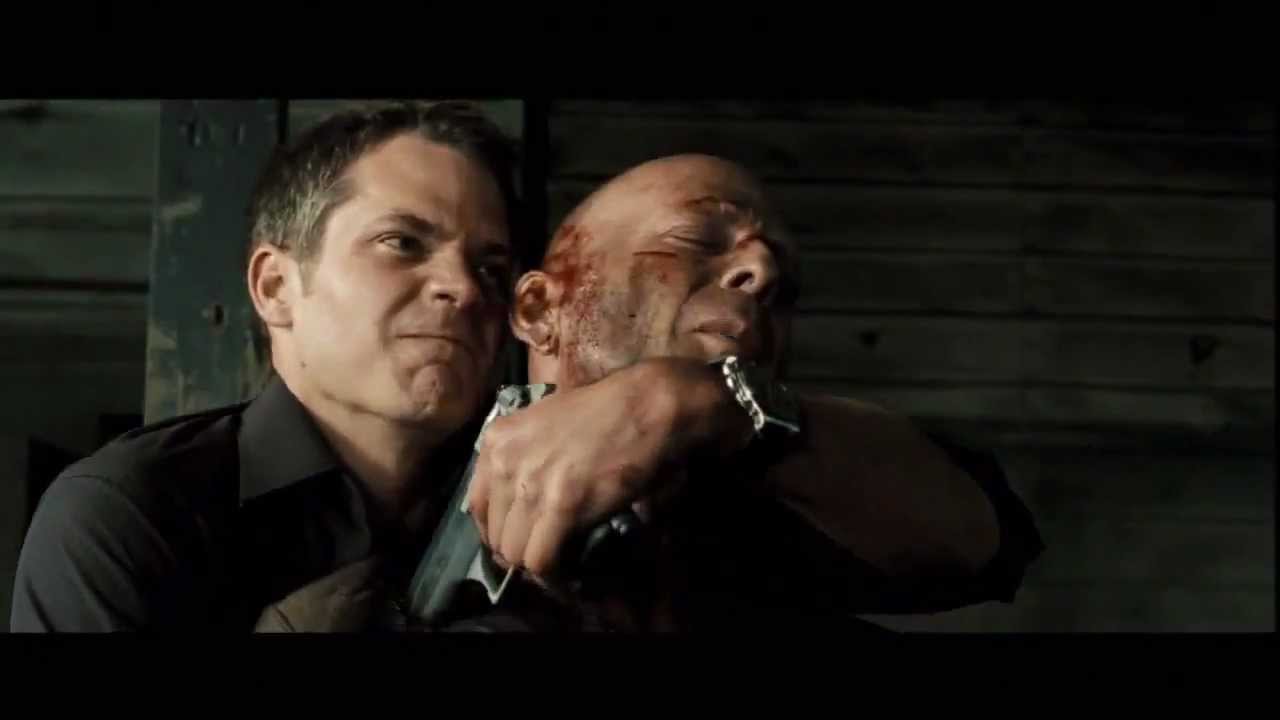 And of course there’s Maggie Q as Mai Linh, Gabriel’s girlfriend, and cold, highly skilled assassin.  Really skilled.  I got great satisfaction out of her death.

And while Die Hard 2 has the best “Yippy-kay-ay, motherfucker!” moment, Die Hard 4.0 has the most original one.  (The “fucker” part was muted by a gunshot.)  Die Hard 4.0 is also the mildest of the Die Hard movies – the language, while expletive-ridden, is milder then previous installments, and the violence is toned down as well.  There’s plenty of intense violence and fights (but no blood), so I recommend parents watch it themselves before decided whether or not their kids will. 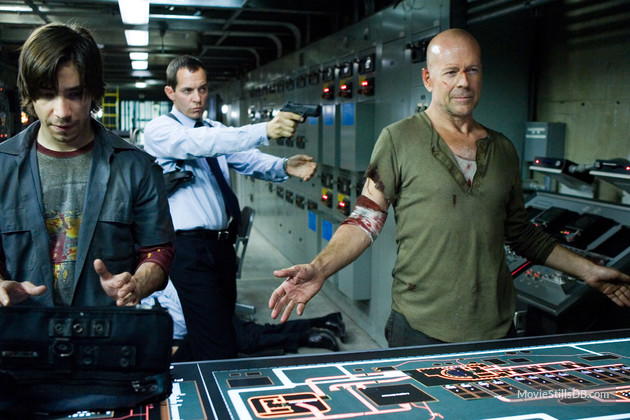 Die Hard 4.0 is great, preposterous fun!  (And also of all the Die Hard films, is the only one to almost recreate the tension of the first.)

Die Hard with a Vengeance trailer:

Die Hard with a Vengeance clip: