Today – October 31st – is Halloween.  A day when many children dress up as goblins, witches, and other horrid things and go about getting treats from strangers (although this practice is becoming dangerous).

What is the origin of Halloween? Here is an interesting article on the subject:

Few pagan festivals have a history as strange as Halloween. This day is the eve of Allhallows Day (All Saints Day) and is one of the most solemn festivals of the Roman Catholic Church. Ironically it is also a day which commemorates beings and rites with which Christendom has claimed to be at war.

The “superstition” of Halloween is that from sundown October 31st until sunrise November 1st is that the unseen spirit world is closer to our world than at any other time. This is supposed to create a special opportunity for interactions between our world, and the world of… 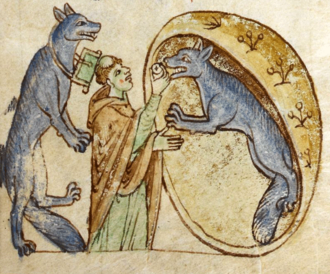 Ah, werewolves.  Popular trope in horror movies and novels.  Usually portrayed as a human who transforms into a humanoid wolf (or as a human-wolf hybrid).  Sometimes the condition (known as lycanthropy) is genetic and hereditary, sometimes it's the result of a werewolf bite, sometimes the result of a curse.  It's often (but not necessarily) related … END_OF_DOCUMENT_TOKEN_TO_BE_REPLACED

Welcome to the 19th edition of My Fortnightly Movie/TV Thoughts!  Last fortnight, I reviewed Star Wars: Episode III – Revenge of the Sith (2005).  This fortnight I’m reviewing:

And as usual, I offer the following disclaimer just to be safe:

The franchise was all set to end on a perfect note with Revenge of the Sith.  But it’s Star Wars.  Unsurprisingly, Disney bought the lucrative franchise from Fox, and announced a new series of films and a new trilogy – to premiere with The Force Awakens…

Today I present my Restored English Translation (RET) of Ester (Esther) chapter 10.  As usual, it contains the Hebrew names, with a glossary of them after the chapter.  At the end is a list of where the Aleph Tavs occur, as they are no longer included in the main text. CHAPTER 10 1 On that … END_OF_DOCUMENT_TOKEN_TO_BE_REPLACED

I come from a large family.  My parents have 8 children (of which I'm the oldest), and my father additionally has 5 older children from previous marriages and relationships - making me the oldest of 8 and the 6th of 13.  Me and my 12 siblings have 4 mothers.  We range in age from 50 … END_OF_DOCUMENT_TOKEN_TO_BE_REPLACED

Today is the Feast of Tabernacles (Sukkot) in Australia – on my calendar (see Feast Calendar).

Shabbat shalom!  Today – Saturday, October 13th, 2018 – is the first day of Sukkot, otherwise known as the Feast of Tabernacles or Booths (which is one of the Torah feasts and still applies).  It is described in Leviticus 23:

And Jehovah spoke to Moses, saying, Speak to the sons of Israel, saying, In the fifteenth day of this seventh month shall be a Feast of Booths seven days to Jehovah.  On the first day shall be a holy gathering; you shall do no work of service.  Seven days you shall bring a fire offering to Jehovah; on the eighth day you shall have a holy gathering; and you shall burn the fire offering to Jehovah; it is a solemn assembly; you shall do no work of service [translation correction: no work whatsoever].  (Leviticus 23: 33-36, Green’s Literal Translation)

You may have thought that Sukkot has passed.  For…