Skip to content
jmshistorycorner Bible, Canon of Scripture, Uncategorized May 21, 2020May 21, 2020

Here is a collection of a few different, persistent, and very frustrating myths, misconceptions, or even outright lies that circulate in connection with Christianity.  I thought I’d gather a few into one place and set the record straight. 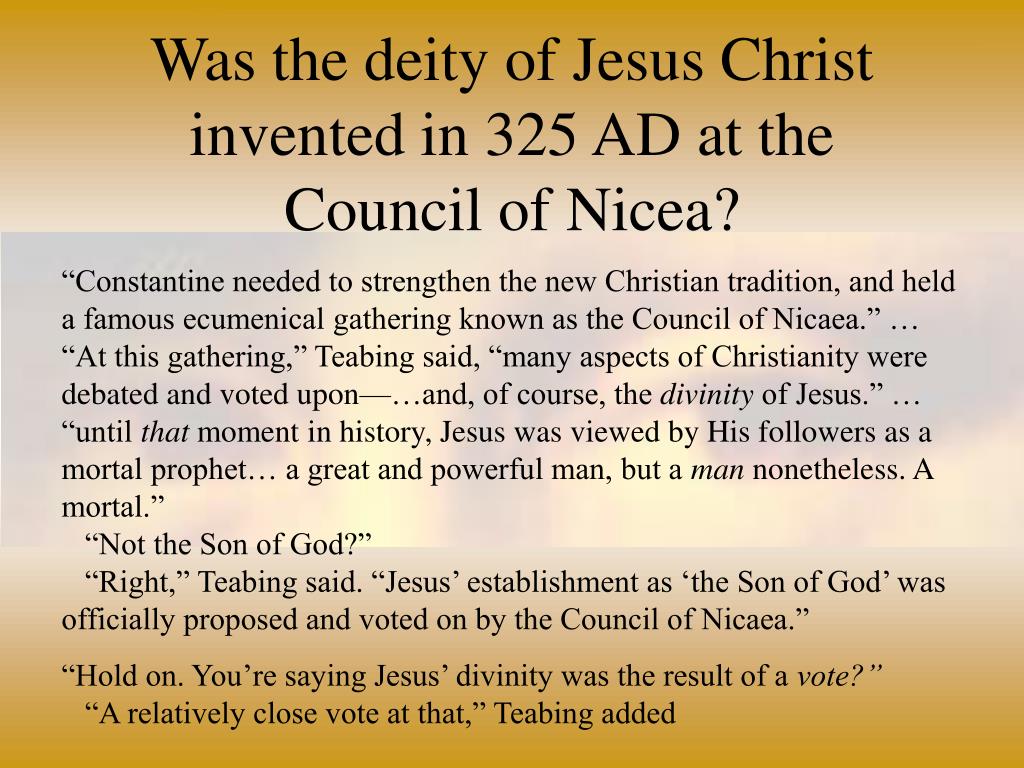 (The above graphic – used to illustrate the claim – is taken from the novel The Da Vinci Code by Dan Brown.  I can’t speak for the book – which I haven’t read – but in the movie, the character of Teabing is shown to be at least partly wrong, and his opinions are simply his opinions.  It’s a good movie, by the way.)

The following graphic does a good job refuting part of the claim:

Additionally, we have New Testament manuscripts from as early as the 2nd century AD – TWO CENTURIES BEFORE THE COUNCIL OF NICEA – AND we have small fragments from the 1st century, FROM THE LIFETIMES OF THE APOSTLES!

ADDITIONALLY, we have non-Christian sources who testify to Jesus’ existence, as well as archaeological evidence.

Quite simply put: the claim that Jesus was an “invention” DOES NOT HOLD UP.

Additionally, we have much evidence – correction, PROOF – that Yeshua/Jesus was ALWAYS considered to be divine, not just human:

And the fact is that the pre-Nicean Biblical manuscripts mention hell etc.  It’s not a “church invention” to “fear monger”.  It’s real.

I probably shouldn’t have included the last of those three (the RCC – Roman Catholic Church) in there because every denomination makes a choice about what books go into its canon, and Catholic decisions, for the most part, only affect Catholics.  But the common idea goes that Constantine/Nicea “finalised” the canon, voted on the Biblical books, added books, or threw out books, etc, etc.  This is simply false.

The proceedings from the Council of Nicea were recorded in the form of the letters sent out to the churches giving the Council’s conclusions and instructions, and by contemporary historians such as Eusebius.  There was nothing secret; everything was published, and everything has survived.  There is NO record of any debate, vote, etc over the Biblical canon.  NONE.  The writings of the church fathers show that there was still debate over a few books for some time after the Council of Nicea (as there had been before hand – despite the claims of some – mainly Protestant apologists, but also some Catholic ones – the Biblical canon has NEVER been universally agreed upon), and of course all of the books that were eventually canonised – by the RCC, Orthodox and Protestant churches – were accepted in varying degrees long before Nicea.

“Constantine made Sunday worship the law, replacing the Biblical Sabbath” 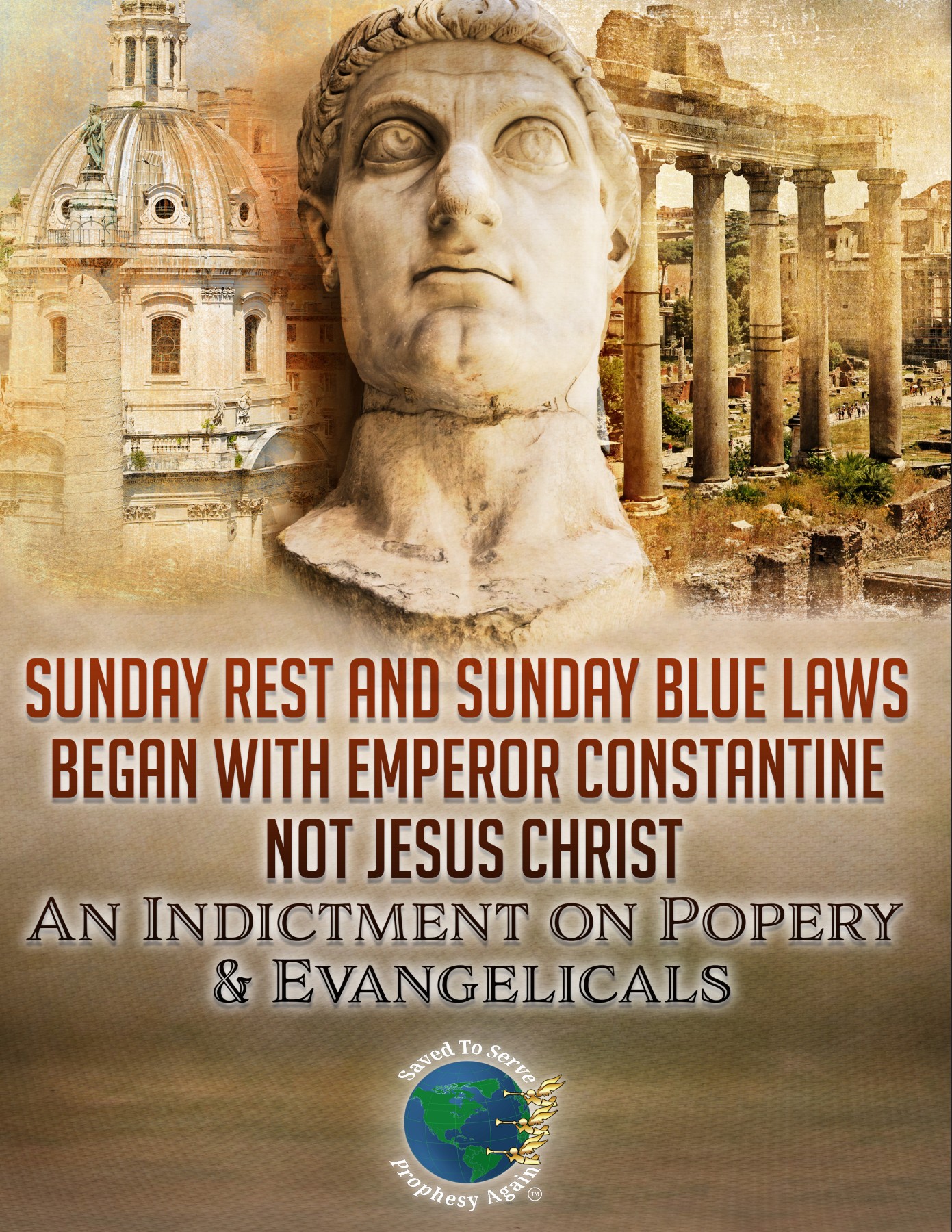 Sadly, I used to believe this.  It’s common among Messianics, SDAs, etc.  For better or for worse, it’s reliably recorded by the pre-Constantine ancients that many Christians viewed/celebrated Sunday as a special day from the late first or early second century AD.  Some gathered and/or taught on that day.

For some Christians (particularly the Nazarenes – who we now often call Messianics), Sunday was celebrated separately to the Biblical Saturday Sabbath (which they continued to observe); it didn’t supersede it.  Others, however, threw out Saturday and celebrated on Sunday.

In other words, there was nothing for Constantine to establish: most Christians already kept Sunday rather than – or sometimes in addition to – the Biblical Sabbath.

BUT WAIT – isn’t it a historical fact that Constantine DID issue a Sunday law?

Yes, he did –  A SECULAR law that had nothing to do with religion, nothing to do with Christians, Catholics, or Yeshua, or an agenda, or the Sabbath.  It was a secular law mandating workers get at least one day of the weekend off, that day being Sunday.  You can read it below:

“Constantine was a Christian” This is EXTREMELY common.  I’ll let Madame Blavatsky point out the irony: 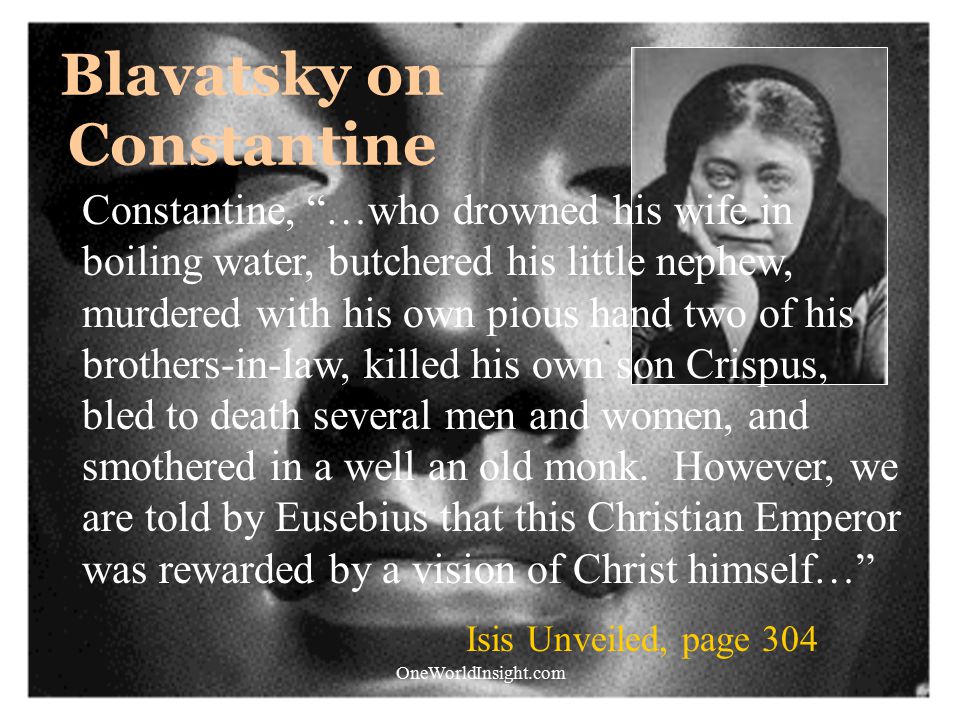 I’ve actually seen some Christians try to brush this off.  However, it’s plain: he was no Christian. 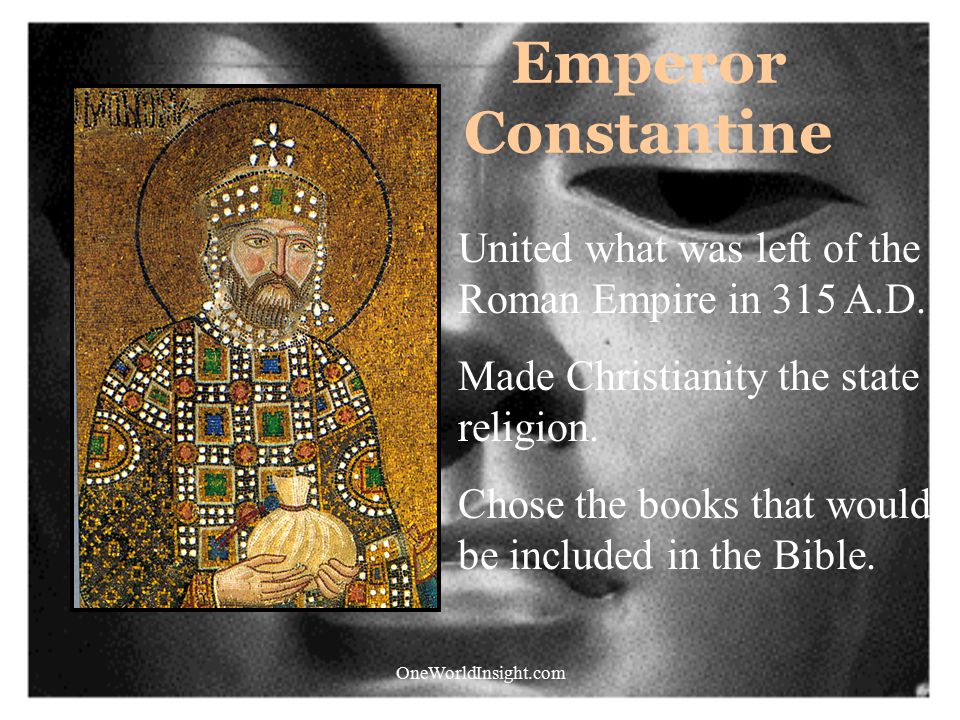 I cover this one in my post Revisiting Easter.  Easter is only known as “Easter” in the English and German speaking worlds.  Everywhere else in the world, for the last 2000 years, Easter was and is called “Passover”.  Additionally, the Niceans only concluded that Christians should be unified in the date of Passover.  That was literally it.  When it came to Passover, Nicea was one of the most useless meetings in history.

“The Jews Never Accepted the Apocrypha”

This claim is frustratingly common – and absolutely false!  Ignoring the debate over whether the Apocrypha is inspired, or my personal opinions on the subject – I cover both here – the fact remains that the oldest extant Jewish sect, the Beta Israel, over 2000 years old, accepts most of the Apocrypha.  The world’s first (known) Bible translation, the Septuagint, translated BY JEWS OVER A CENTURY AND A HALF BEFORE CHRIST, contained the Apocrypha.  The JEWISH community at Qumran appear to have accepted at least some of the Apocrypha (as evidenced by the Dead Sea Scrolls).  The JEWISH Peshitta, a translation of the Tanakh (Old Testament) from Hebrew to Aramaic completed in the 1st or 2nd century AD, contained the Apocrypha.  In the Cairo Geniza, a JEWISH collection of Biblical and secular manuscripts from the 9th century AD, some of the Apocryphal books were found among the BIBLICAL manuscripts.  Sirach, one of the Biblical books, was quoted as Scripture in the Talmud.

This one is a sensitive issue, and one’s evaluation of it will likely depend on your own opinion about the Apocrypha’s canonicity.  However, the continued claim that the Jews “never” accepted any of the Apocryphal books is simply false.

“Most in the early church/church fathers rejected the Apocrypha”

“Origen and many others rejected the Apocrypha” 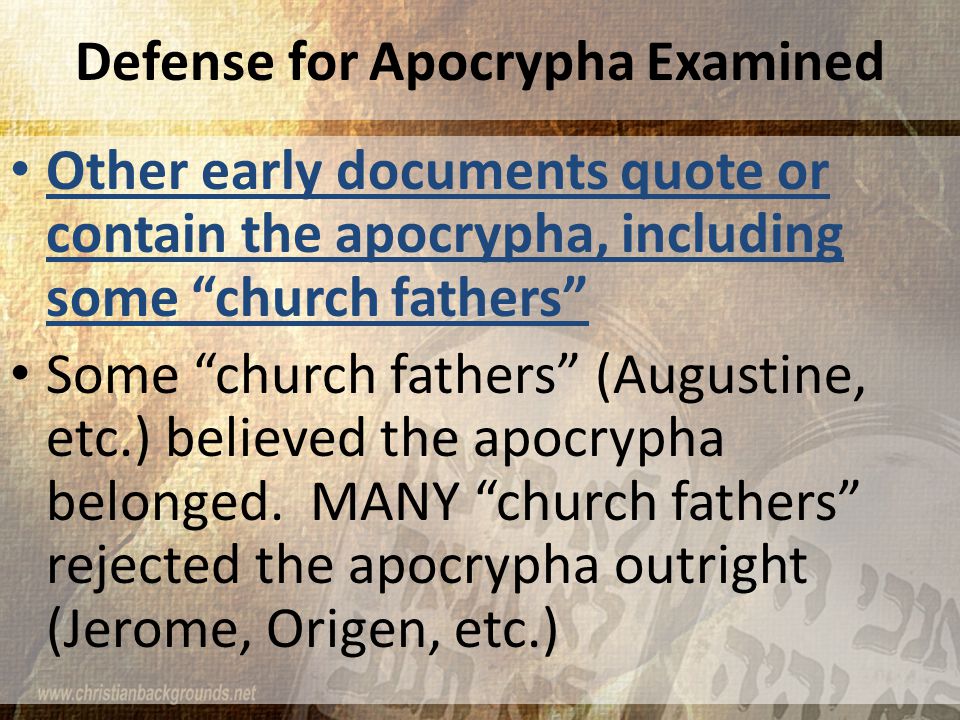 As previously stated, the Biblical canon has never been universally agreed upon (although some books are universally or near-universally accepted).  That said, most of the church fathers who referenced the canon and/or the books we now call Apocryphal, accepted at least some of them as Scripture.  Similarly, many of the ones commonly cited as rejecting the Apocrypha – such as Origen – number among the ones who either directly listed some of the Apocrypha among the books of the Bible, or quoted from or referenced them as “Scripture” or even “Holy Scripture”.  Read some of the quotes for yourself:

Simply put: the frequent claim that the majority of the Fathers & the early Church rejected the Apocrypha/Deuterocanon is A BOLD-FACED LIE.  ESPECIALLY when it is accompanied by names of church fathers who “rejected” the Deuterocanon, since many – if not most – of these DEFINITELY – not just possibly – accepted the Deuterocanon.

“The Bible has been changed countless times; it’s impossible to know what it originally said”

“The Catholics changed the Bible”

It’s never been a better time to be a Bible translator!

The ancient PRE-CATHOLIC (some even PRE-CHRIST) manuscripts by and large are the same as the later ones.  As in, what differences there are are almost all purely grammatical (some of which “differences” translate the exact same way in English).  There are practically NO differences of consequence OR OF DOCTRINE.

MORE IMPORTANTLY: THESE ANCIENT MANUSCRIPTS ARE THE BASIS FOR PRACTICALLY ALL MODERN TRANSLATIONS!

Even IF there had been massive changes – AND THERE HAVEN’T – they’ve been nullified by modern translational work, rendering this common claim NULL AND VOID!

“Catholics pray to Lucifer during hymns” 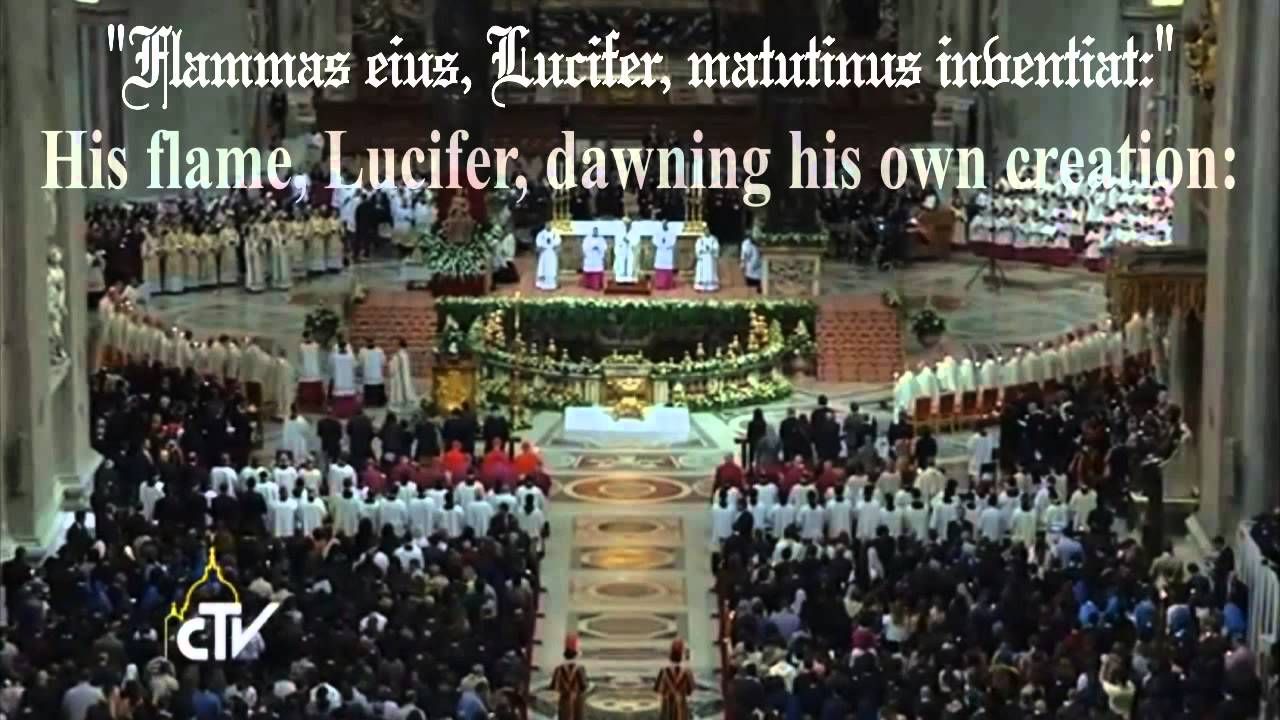 LUCIFER IS NOT A NAME OF OR FOR THE DEVIL.  It doesn’t even appear in the (Hebrew) Bible.  It’s a Latin word meaning morning star, light bringer, etc.  A regular Latin word that is used multiple times in the Latin translations of the Scriptures to refer to Jesus and God Themselves.  We associate it with the devil thanks to a blunder by the KJV translators, where an adjective was replaced with the Latin translation of the word with a capitalised L to make it look like a proper name.

So, couple ignorance with greed and dishonesty, and you’ll find videos of Catholic hymns that translate every word EXCEPT “dawn/morning star” (lucifer), capitalise the L (yes, deliberate deception) and proclaim that Catholics literally worship satan.

19 thoughts on “Refuting Myths, Misconceptions and Lies About Our Faith”