The Doctor’s famous description of time in Doctor Who – first introduced in the episode Blink, seen above – may be closer to the truth than you think.

Can the Future Affect the Past? These Physics Experiments Demonstrate How

Three experiments show that future events can affect the past. By  Marcia Wendorf June 28, 2019 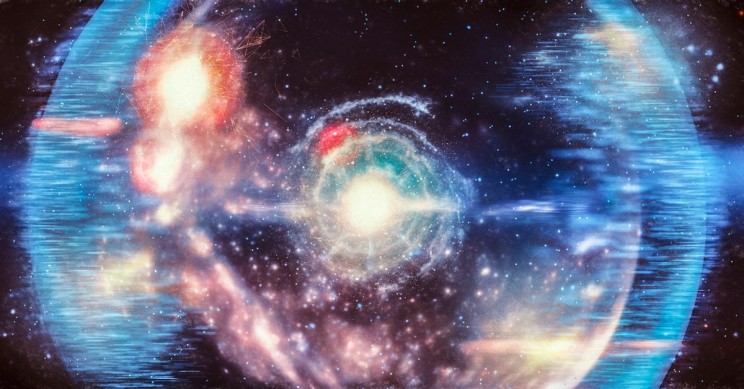 We all know that the quantum world is weird, but just how weird is it that the future can affect the past?

Indeterminacy is the fact that in quantum mechanics, no matter how much you know about a quantum particle, you can’t predict its quantum state until you measure it. Instead, what quantum mechanics provides is the statistical probabilities of a particular state.

This is best summed up by Schrodinger’s famous cat in a box, who is in a superposition, being both alive and dead, until the box is opened.

A particle’s state is not just unknown, it is truly undetermined until it is measured. It is the act of measurement itself that forces the particle, or cat, to collapse to a definite state.

In an experiment conducted in 2015 at Washington University in St. Louis, a team cooled a simple superconducting circuit to near absolute zero so that it entered quantum space. They then used the bottom two energy levels of this Qubit — the ground state and an excited state — as their model quantum system.

The weird rules of quantum mechanics state that between these two states, there are an infinite number of quantum states that are superpositions, or combinations, of the ground and excited states.

The team then did what’s called a “strong” measurement, which forced the qubit into one or the other of the two states, but the scientists hid the result of that measurement from themselves.

Then, they did a “weak”, or off-resonance, measurement by putting the qubit inside a box and sending in a few microwave photons, whose quantum fields interacted with the superconducting circuit. When the photons exited the box, they bore information about the quantum system, but crucially, they didn’t disturb the qubit.

The team then tried to guess the hidden result of the strong measurement.

Calculating forward in time, they used the Born equation that expresses the probability of finding the system in either of the two states, and their guesses were 50-50.

Then, they calculated backwards in time by flipping the equations, and they got what they called a hindsight prediction, or “retrodiction.” When they analyzed the retrodictions, their guesses were 90 percent accurate when checked against the result of the stored measurement.

RELATED: RESEARCHERS REVERSE THE FLOW OF TIME ON A QUANTUM COMPUTER

The measured quantum state somehow incorporated information from the future as well as the past. This is akin to what you do today change what you did yesterday.

One of those implications is that in the quantum world, time runs both backwards and forwards, or that there is time symmetry.

And, that implies that the “arrow of time” is actually a double-headed arrow. Team leader Kater Murch said, “It’s not clear why in the real world, the world made up of many particles, time only goes forward and entropy always increases.”

In an experiment published on May 25, 2015, in Nature Physics, scientists at Australian National University sent a single atom down a path through a grate formed by laser beams. This is similar to the solid grate used in the well known double-slit experiment that displays light’s dual particle and wave nature.

In the Australian National University experiment, if the atom acted like a particle it would travel in a straight line, but if it acted like a wave, it would produce the interference bands.

Then, the scientists randomly added a second laser grate.

When the second grate was present, the atoms created the interference pattern. When it was not there, they behaved like particles and traveled a single path. However, whether or not the second grate was added was only determined after the atom had made it through the first grate.

Study author Andrew Truscott noted that “a future event causes the photon to decide its past.”

Yakir Aharonov of Tel-Aviv University in Israel and colleagues have argued that when an experiment “strongly” measures the state of quantum particles, that measurement affects the states that the particles had during an earlier “weak” measurement.

Aharonov’s first proposed this 30 years ago, and it is called “two-state vector formalism” (TSVF).

TSVF considers the correlations between particles in 4D space-time, rather than 3D. Aharonov’s colleague Avshalom Elitzur of the Weizmann Institute of Science says, “In space–time as a whole, it is a continuous interaction extending between past and future events.”

As a huge fan of time travel/time bending fiction – Doctor Who, Back to the Future, The Terminator, Avengers: Endgame, Chilling Adventures of Sabrina, TimeRiders, and the recent Tenet – I must say I really like the idea.